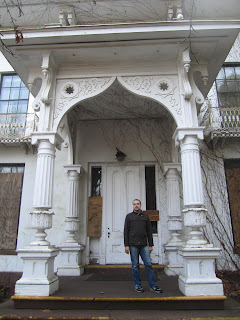 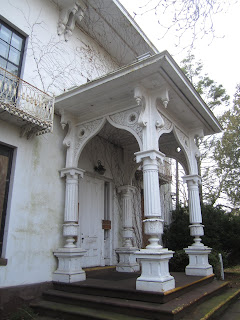 I know the picture of this house covered in overgrown vines and trees might suggest a glamorously abandoned southern mansion, but it is actually near the center of downtown Portland, CT. My friend, pictured above, and I wandered onto the property so that he could gather information on the house for a project, so I got these pictures. The Erastus Brainerd house in Portland is another fascinating Indian Italianate, but it is also one in peril. Built in 1852 as a symmetrical plan house, probably by Henry Austin, the originator of this style in the US, the Brainerd house exhibits many of the characteristics associated with this style and found in the Bristol house in New Haven. Brainerd was the son of a quarry owner, an important role in a town which revolved around its famous brownstone quarries. Interestingly, Brainerd decided not to build out of brownstone, preferring the exotic Indian style.

It has a very large chhattri porch with an unscalloped ogee arch, candelabra columns, long s curve brackets, arabesque strapwork, and multi-foil piercings in the spandrels. A very cool aspect to the porch is that the arabesques are continued on the inside. These types of candelabra columns, with the lotus base, fluted shaft, and dripping echinus (the flat piece at the top of the column) sitting atop a plinth with chamfered edges, are an example of the standard design of candelabra columns in Connecticut houses. The door follows Greek Revival precedents with sidelights and a transom. The bulk of the house is like the Bristol house, stuccoed with iron balconies, a wide eave, paired, simple brackets, and a low roof monitor. The lacy iron balconies look original. A side wing to the left has a porch with very odd ogee arches and paired simplified candelabra columns that seem to sit on impossibly small turned bases. The rear of the house has a strange low addition with a fenestration I can't quite make sense of. There might be a strange shift in the house's floor as you near the back. The house also includes a matching carriage house.

The house was part of a hospital complex which is slated for demolition along with a lovely temple front Greek Revival house and a Stick Style home. It was used for years as an administration building and clinic, but the house seems quite sturdy and the interiors, though unused for a while, also seem intact, at least from what I saw. The plan is to demolish the houses for a CVS and condos, a travesty since both are in a registered district and since the house is a rare example of the impressive Indian Italianate style. Developers seem stymied over parking access to the site, and there even was a possibility they would tear down the house and build a simplified version elsewhere on the property with some details (a particularly bizarre plan that I can't make sense of). Fingers crossed that the plan will never go through! The following pictures show all the sides of the house and some of the interior. 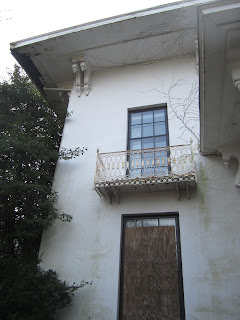 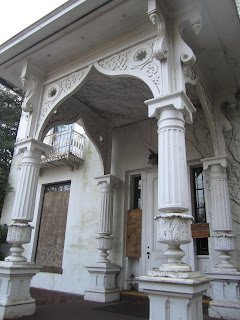 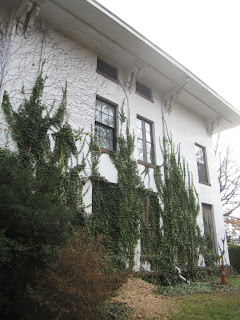 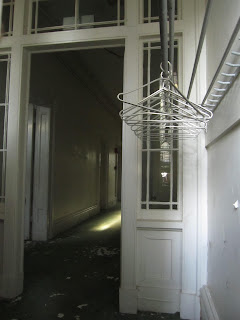 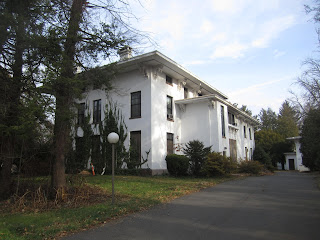 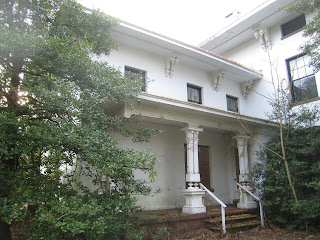 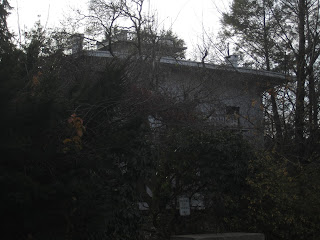 The other house slated for demolition: 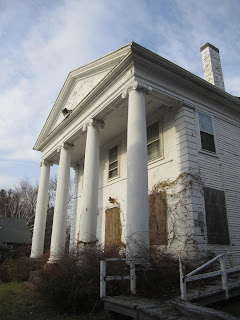