This house was constructed in 1866 by Justin Loomis, a president of Bucknell College. He, himself, was an amateur architect, which explains the eccentricities of the design. It doesn't comfortably fit into any of the standard facade plans, through its base is three bay and symmetrical. The body of the house is generally standard, with a typical porch, brackets, and window hood moldings. But two features really stand out. First and most obvious is the polygonal tower to the right. Polygonal towers themselves are quite a rarity, but to have one stuck on the front of a house with a conical roof is extremely uncommon. Second is the great height of the roof, which is almost as tall as the first two stories and the pointed dormers. The roof seems to scream Gothic Revival, while the rest of the design is standard Italianate. I'm not sure I find it the most successful design, but it is certainly inventive. I give kudos to whoever picked that paint scheme; it looks very period appropriate!
Posted by JDF at 10:53 AM 2 comments: 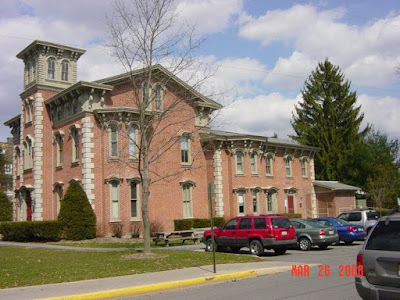 This fine home was built by Daniel Bright Miller, a professor at Bucknell in the 1860s. It is now called Cooley Hall and houses college departments. The house is of the central tower type and makes a very grand impression with all of its heavy detailing, brick and stone, and massing. The facade is fine brick with stone quoins and hood moldings. The first floor features segmental arched windows with hood moldings on brackets conforming to the arch curve; same with the front door, which unexpectedly lacks a porch (is one missing or was it always that way? The second floor has rectangular windows with sharply filleted corners with a triple arched Palladian window in the central tower bay. The third bracketed floor is generous and larger than typical, with arched windows between extremely long double s scroll brackets making it an arched cornice type. Again, the central tower has paired arched windows. Finally the top stage of the tower, separated by a small cornice has paired brackets, double windows with Venetian tracery and carved wooden quoins. The house shows some exact similarities to the Marsh house, the last entry. The top of the tower matches the Marsh cupola; both houses use quoins and rustication; both have a bay window equally located on the side and do not continue the brackets on the side facade. Both feature paired windows with tracery in the side gable and a similar long, finished wing extending out the back. Both also have a triple arched Palladian window in the second floor. These are far too many coincidences and suggest that the same designer designed both. 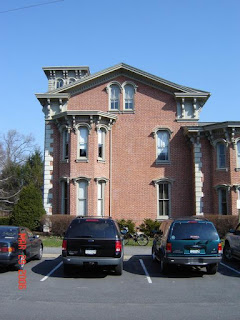 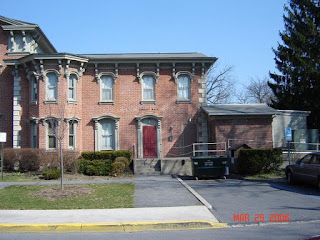 The James S. Marsh house, built in the 1860s by an important iron foundry owner in Lewisburg is an excellent survival story. Left in terrible repair and condemned after conversion into apartments, the house was restored by the Ludwigs as you can read here (with accompanying photos).

It is a tour de force of Italianate design and includes all sorts of bells and whistles. It is a symmetrical five bay house with a gable roof and, unusually, a cupola. Usually cupolas are placed on hip roofs and not gabled roofs. On the first floor, the house has segmental arched windows and on the second and third round arched windows. All have a similar drip molding that conforms to the arch shape and ends in Gothic style finials and almost all have Venetian tracery. In the center is a triple arched palladian window, also with a conforming molding. The designer even put grand windows in the attic story at the end, a rather expensive decision. The finish is stucco with impressive quoins at the corners and a rusticated basement. The front looks a little bare. It's likely that it had an entrance porch that matched the side porch, a rather rich design with a fringe, s and c scroll brackets, and arches interrupted by carved keystones and a wooden fringe. The cornice is the fillet cornice type with a deep architrave and filleted panels alternating with filleted windows topped by a run of fringe made by pieces of wooden molding. The brackets are s scroll type and the sides form curved rinceaux. Particularly lavish is the cupola with wood rusticated to look like masonry. The backets and two windows match the facade windows with Venetian tracery and strong moldings with added multi eared surrounds. A different cornice type, the undulating cornice was used here. An earlier view of the house shows a grand balustrade on the cupola and a balustrade atop both porches. These things always rot off. 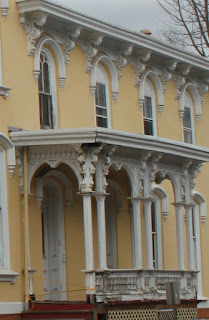 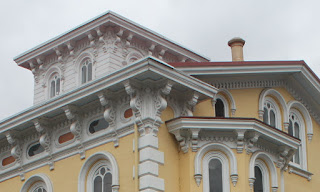 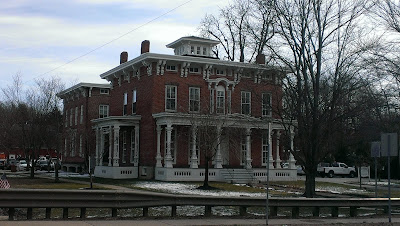 John T. Leigh was one of the major leaders of Clinton. He founded the towns major bank and helped it incorporate in 1865 along with Bosenbury. He also provided the land on which the town's major institutions were established. Leigh suitably built himself a grand Italianate house to reflect his influence (on the appropriately named Leigh street). The house suffered a fire in 1971 and then became the town municipal building with additions added to provide needed office space.

The house is a five bay, symmetrical plan block articulated in fine brick and brownstone. The first floor features five almost floor to ceiling windows with a grand porch that bears much in common with that at the town's Bosenbury house, including the chamfered columns, filleted flat arches and the central engaged pediment over the entrance. The columns of the porch are themselves interesting for their extremely exaggerated moldings, making them look a bit exotic. The cornice of the porch features a cut out fringe. On the side porches, only one of which survives, the columns are pierced with cut out designs. The second floor features a typical brownstone lintel design over the windows with a palladian window in the center with a corresponding hood molding on brackets. A projecting brick architrave molding sets off the third floor with its windows that correspond even to the proportions of the palladian window. The brackets are executed with a high degree of carpenter's elaboration with the main body being a large c scroll and then a rosette with a small s scroll below, rather layering on bracket type over bracket type. The whole is topped with a cute little cupola also with three windows. I suspect that there are some missing doo-dads like a finial.

Overall this is a beautifully preserved house with an imposing presence (standing in front of it, its proportions are very grand and it's rather tall). Design-wise, there is much to remind us of Samuel Sloan's work. 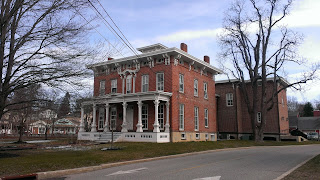 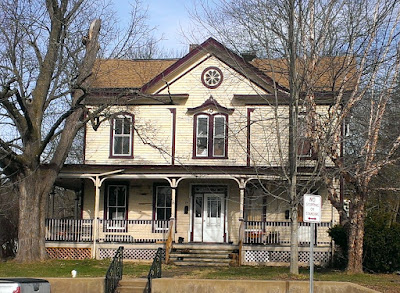 Just a few lots down from the Bosenbury house is this interesting gem, a symmetrical plan house which is oddly five bays on the first floor and three bays on the second floor. On the first, the house is surrounded by an oddly asymmetrical porch which wraps around one side but not the other leaving us with a four bay porch that does not present a symmetrical number of bays on each side. The front door has a Greek Revival eared molding surround. On the second floor, all the windows are segmental arched with a double window in the center with a pointed molding with a vegetal anthemion above. There is an engaged open pediment above with the typical Clinton wheel window, this time with eight spokes rather than four. Oddly, the pediment is deeply enclosed by the eaves. The design unfortunately suffers from a rather odd painting decision, with the bordering boards not painted to form a unity with the entablature, which if painted the same color would make the design much clearer. The house likely dates from the 1850s-60s.
Posted by JDF at 10:18 AM No comments: 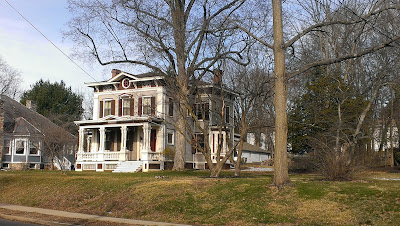 Clinton, NJ is an amazingly well-preserved small New Jersey town. Coming into the town on Main Street you see this small three-bay side hall plan house, the Eli Bosenbury House, from 1850. Many examples of these side hall houses can be rather bland, but given that Bosenbury was a carpenter and home builder who heavily influenced the style of the town, he used his own house to showcase his abilities. The first floor has a fine preserved porch common in this area with thin paired, chamfered columns (amazingly the apparently metal grills under the porch are intact!). The house emphasizes the central thrust of the design by having a pediment in the central bay of the porch, a pedimented hood mold on the center window, and an engaged pediment in the center bay. The house has s scroll brackets that are particularly drippy and curvaceous with deep carving that suggests leaves. In the entablature there are two small windows with original Greek Revival metal grills and in the center a wheel window, a touch of Romanesque design that is a unique feature to the houses in Clinton, perhaps popularized by Bosenbury as a designer. It's one of the key town vernaculars. A further unexpected design element is the facade is framed by a filleted arch and paneled pilasters, giving it a much stronger frame for the whole facade. It's an amazingly preserved house with all its details intact.

A nearly identical house is a few houses down: 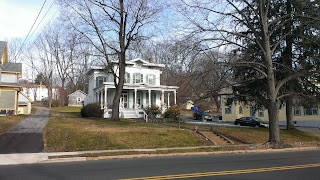 This one has a much grander porch that wraps around the house. There is still the vernacular wheel window in the engaged pediment. Its proximity and similarity suggest it was also by the same designer.
Posted by JDF at 9:58 AM No comments: 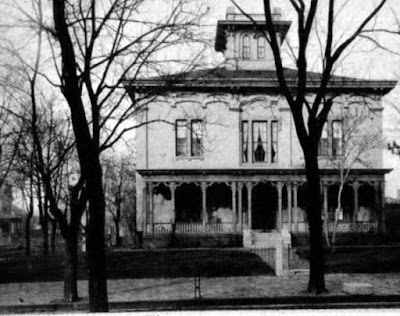 Although not part of E Town Street, but part of the E Broad Street area, another mansions street in its own right, I couldn't resist this rather bizarre Italianate of 1853. The house is a symmetrical plan Italianate with a brick façade, and it's in this paneled brick style that it is most distinctive. The house is divided by its brickwork into three bays by pilasters topped with moldings. The side bays enclose double windows with filleted corners, while the central bay has a rectangular triple window with narrow side lights. The lintels above seem to be stone with incised designs, eared, rising to a shallow point. But the entablature is truly strange, comprising on the side bays three evenly spaced segmental arches with some kind of projecting finials and panels that match the curve of the arches. In the central bay, there is a more elaborately framed trefoil curve that suggests a triple arched Palladian design, but it is strange that that is not reflected in the window. The porch similarly has this trefoil shape, albeit with open spandrels, resting on thin columns. I can't actually tell the forms of the brackets from the images. The cupola seems almost oversize for the house, with curved frames around the tombstone windows and a balustrade above. The Midwest liked its fancy brickwork, but this is a very odd design. The house was torn down in 1928.